In the 1950s, people thought that by 2000 people would be flying around in atomic-powered cars. They might be somewhat disappointed that our roads have still not taken to the air. But what is even more disappointing is that they are also inundated with potholes.

Last week I learned that there is an artist who fills potholes with art.

Albeit a genuinely creative response to a bad situation, I doubt that the artist is doing this address the problem. If art communicates then this one is certainly mocking the fact that despite our technological advances we still cannot pave roads that last.

This inspired me to dig a little deeper to understand the problem’s nuances, the innovations people are coming up with, and to also see for myself whether inspiration can come from other technology area.

First things first: filling potholes with art, or anything else for that matter, isn’t a solution. The canvas is too big. How big exactly?

Well, the British did a survey a few years back. They found that there are so many potholes in the UK that it would take 13 years + £12 billion to repair them all (with asphalt, not art!). Even if they invested the time and money, a repaired pothole patch only lasts 3-5 years, so there is no guarantee that even if such a repair was attempted, there would be fewer potholes at the end. With the current methods and constraints, the pothole problem is practically impossible to fix.

Let’s begin by asking the most basic question.

How do potholes form?

Turns out that this question has already been investigated in a lot of detail. It’s the unending and unceasing forces of weather and traffic that deteriorates our roads. Potholes are not the first, but the ultimate result of this deterioration process.

Most damage is done by water, and in cold regions, by ice. When water finds a way to reach to the road’s foundation and gets logged there, it weakens the support to the bulk of the road. Without sufficient support from the bottom, the road stops acting as a rigid mass. When heavy vehicles pass on it in this condition, parts of it push against each other and tend to displace from their position.

Over time, these pushes and pulls give rise to small cracks. These cracks allow even more water to reach the foundation, further accelerating the rate of damage. A tipping point occurs when the propagating cracks start join each other and forming a pattern aptly called crocodile cracking. 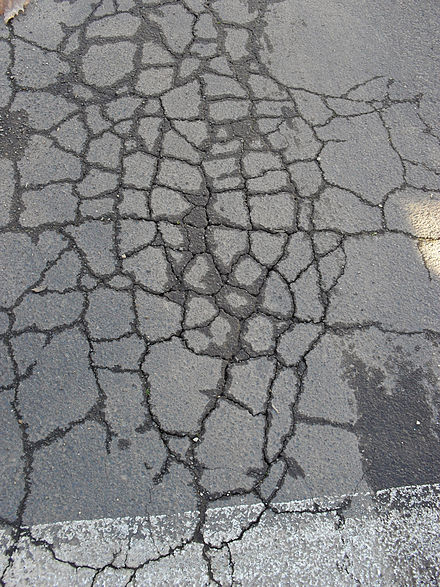 Once crocodile cracks are there, the road effectively becomes a mosaic of individual patches that don’t support each other mechanically. With further degradation, these patches start coming off, first in part, as gravel from the edges, and then as big chunks. When the chunks are gone, what remains are potholes.

How can pothole be prevented?

The answer is fairly straightforward in light of the above explanation. The good old wisdom of prevention being better than cure applies. Potholes are the final result a long degradation process. Therefore, we can delay their appearance by slowing down the degradation itself. And since the degradation is caused primarily by cracks, we need way to prevent or at least slow down their formation.

What solutions is the industry developing?

To find answer to this problem, I looked at hundreds of patents filed by various companies and inventors in this area.

Most patents describe pothole repairing machinery. Some focus on high automation, some on the mechanical designs, some on the ability to work with different types and widths of roads. Being more interested in techniques to prevent potholes as opposed to repairing them, I ignore these patents.

Some patents talk about precise measurements of pothole using things like laser scanners. Their aim is to accurately assess the pothole and then pass on this information to a machine that can fill the pothole with the right amount of material. This is useful to avoid a pronounced “bump” that is easily the most annoying thing about repaired potholes. A number of other patents in the same boat discuss advanced filling materials. Some are foam based, some solidify quickly, some use polymer reinforcements, etc. But again, these are corrective techniques, not preventive.

Interestingly, the number of patents talking about pothole repairing greatly outnumber the patents talking about prevention measure. It is as if the industry is brainstorming almost entirely on short term fixes. One patent even suggests a seemingly elaborate method of making drill-holes in the foundation to provide radially protruding arms that can keep the patch fixed in its place.

A commercial explanation for why most patent focus on repairing could be that there is much more demand for corrective, as compared to the preventive business (would you invest in a hospital or a gym?).

Nevertheless, there are a few patents that talk about preventive measures.

Some patents talk about compositions for sealing cracks. Many of these are made up of polymer mixes and can seep into narrow cracks and crannies, thus acting as a barrier to the entry of water. Sealed cracks, especially when in early stages, effectively bring the road to its original form, disallowing water’s entry to the base layers. 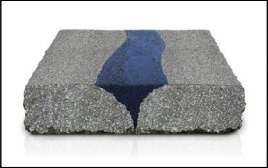 There is also mention of 3D printing technology for road construction. 3D printing could be useful for crack sealing too. An automated crack filling machine could scan and seal a lot of micro-cracks in very early stages or perhaps right after the road has been constructed. Micro crack sealing in this manner could also be more cost effective than sealing much wider cracks at a later stage.

Some patents suggest textile reinforced roads that could also improve the road’s longevity by providing strong binding in the bulk of the material.

None of the solutions that I came across in the patents seemed impressive. I also searched products and services offered by contemporary companies in this domain and they too were incremental innovations. Good to have, but without the promise of significant progress.

After looking at in-domain solutions from the road construction/maintenance industry, I looked for some fresh ideas in other domains. Despite having no knowledge of civil engineering beyond a single course I took in college, I wanted to see whether I could find some interesting ideas, which could, in theory be applied to this problem.

The first patent I found to be interesting came from semiconductor industry. It talks about arresting cracks on semiconductor chips. The reason for why cracks develop in chips (thermal stresses) is much more different than why they develop in roads, but it seems that the solution could be interchangeable. The patent suggests the use of microscopic traces (think of them as walls) after regularly spaced intervals (visible in drawings below as horizontal lines marked as “28”). A crack that forms between two traces will stay within that region and cannot propagate further.

It does not seem like a far-fetched idea that a ‘network’ of such traces could not be used to arrest cracks developing in roads. The traces would need to have different mechanical properties than the bulk of the material, but it could perhaps be made from the same material processed/compacted differently.

These traces could isolate the road in separate areas, and contain the damage to one area, thus stopping the metaphoric bad apple from spoiling the good ones.

The next interesting patent I found came from the field of nuclear reactors. The patent talks about continuous monitoring and forecasting the crack growths in a nuclear reactor (there is definitely a lot to gain by learning how cracks are handled here – because, for obvious reasons, we cannot wait around for the emergence of the equivalent of a pothole in the reactor).

In this patent, all cracks are monitored at regular intervals and the timestamped data is fed to a computer. Based on the past data, the computer models and predicts each crack’s growth. This is great information to take decisions in time and avoiding major failure.

Translating this idea for road maintenance is no rocket science. There is no apparent reason for why such monitoring and forecasting could not or should not be done for roads.

As soon as it is economically feasible, technology should naturally trickle down from high tech and specialized areas to more mundane areas of life. Think about solar cells which were first exclusively used in satellites but have become ubiquitous. Same thing happened with computers.

With drones and high resolution cameras available for cheap, it should be feasible to closely track road health just as that of a nuclear reactor. This can provide us a real-time heat map of the road quality across an entire region. Not just that, but with advanced modelling capabilities available in cloud, we can also have a future-projected version of the same heatmap. Such data can come in handy during planning and optimization of maintenance resources.

The next patent also comes from the semiconductor domain (looks like it’s a great industry for those in road manufacturing to learn from, even if not obvious). So this patent describes resin-filled capsules embedded in a chip. If a crack develops in the chip due to thermal stress cycles, when it reach one of these these capsules, the capsule wall rupture and the sealant inside get released, sealing the crack itself.

In theory, this idea could also be transported to roads. Capsules filled with asphalt or polymer compositions used for sealing cracks could be embedded in the road at regularly spaced intervals. They could seal the cracks as when they form. Some research will certainly be required to find the optimum parameters of this tech, but considering how cool this self-healing technology would be, it’s certainly a promising direction.

Do you learn from other industries?

There are countless example of successful cross-industry innovations but when faced with a problem, we seldom think to turn to other industries for an answer. This is in-part a habit, and in-part a skill, both of which come through practice. Subscribe to our newsletter to train your thinking muscle to pick such cross-industry ideas.

Mahesh is one of the first authors on Blip Reader. Besides a broad passion for technology, he loves reading, thinking, and writing about innovative problem solving.